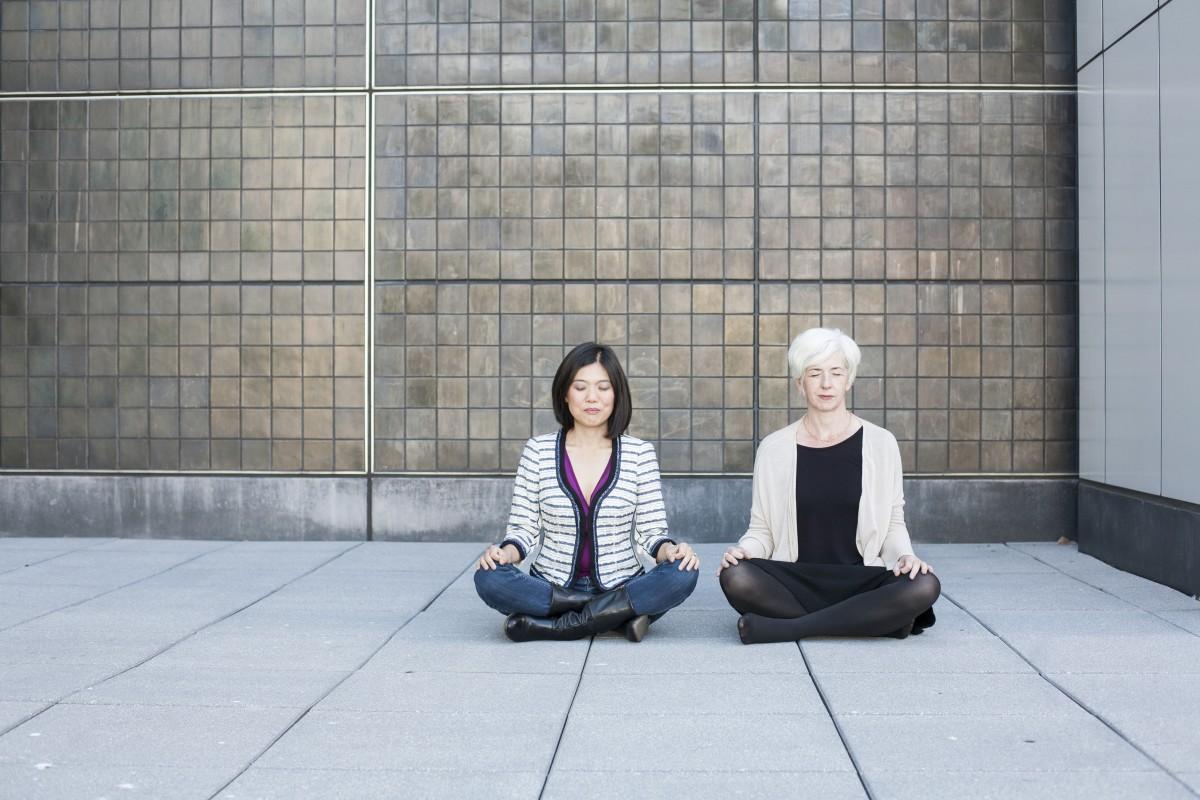 When I tell people that I’m a lawyer who teaches other lawyers and professionals to practice mindfulness and meditation, I get a lot of puzzled looks. Lawyers may seem like an unlikely group of professionals to practice mindfulness and meditation, but there’s a growing number of law schools and law firms teaching these tools for improved focus/concentration, emotional regulation and the many other scientifically proven benefits. Other professionals, especially in the tech world, are also using this ancient practice to improve leadership skills and collaboration, and to decrease healthcare costs. Some of the companies that are offering mindfulness training include Google, Salesforce, Aetna, Goldman Sachs Group, Blackrock and Bank of America.

The practice of mindfulness and meditation has been around for thousands of years but has gained interested in the business world primarily because we now have the ability to do the one thing that was never possible before—see how these practices change the wiring and the makeup of our brains.

I started practicing mindfulness and meditation because of debilitating anxiety. Much of the work I do as a lawyer requires anticipating all the bad things that can happen in a case—conditions ripe for anxiety. In a 2013 Massachusetts General Hospital study, 93 individuals with DSM-IV-diagnosed generalized anxiety disorder (GAD) were randomly assigned to an 8-week group intervention with mindfulness-based stress reduction (MBSR) or to a control group, stress management education (SME). The group that went through the MBSR program was associated with a significantly greater reduction in anxiety.

Humans naturally rely on established associations and cognitive shortcuts to navigate through the world. Some shortcuts are necessary–for example, knowing your bias towards what you prefer to eat for breakfast. However, these associations can be destructive when it comes to certain biases, especially related to age and race. In the criminal law context, for instance, it’s crucial that everyone involved in the system, from police officers, prosecutors and defense attorneys to the judges, be mindful of their own biases.

In a 2015 Central Michigan University study by Professor Adam Lueke, participants listened to either a mindfulness or a control audio. In this study, mindfulness meditation caused an increase in state mindfulness and a decrease in implicit race and age bias.

In a follow-up study, Professor Leuke took these results a step further to see if the same mindfulness intervention could affect conscious behavior as well. Research participants played a game that measures trust levels. Essentially, participants looked at a bunch of pictures of various people of different races and gauged how much they trusted them to help them win money in the game, or potentially steal the money away from them. Control participants trusted white interaction partners far more than black ones, but the mindfulness group trusted both groups almost identically.

Mindfulness-based cognitive therapy (MBCT) combines elements from mindfulness-based stress reduction (MBSR) and cognitive behavioral therapy (CBT). According to American Psychological Association, “MBCT is an eight-week, group-based program that incorporates mindfulness exercises including yoga, body awareness and daily homework, such as eating or doing household chores, with full attention to what one is doing, moment by moment.”

“People at risk for depression are dealing with a lot of negative thoughts, feelings and beliefs about themselves, and this can easily slide into a depressive relapse,” says Willem Kuyken, PhD, a professor at the University of Oxford in the United Kingdom. “MBCT helps them to recognize that’s happening, engage with it in a different way and respond to it with equanimity and compassion.” Professor Kuyken conducted a study which found that MBCT helped to prevent depression recurrence as effectively as maintenance antidepressant medication did.

Body dissatisfaction is a major source of suffering among women of all ages. In a study by researchers Ellen R. Albertson, Kristin D. Neff and Karen E. Dill-Shackleford, women were assigned to either a meditation intervention group or a control group. Those in the intervention group received three-week self-compassion meditation training. Compared to the control group, the women in the intervention group “experienced significantly greater reduction in body dissatisfaction, body shame and contingent self-worth based on appearance, as well as greater gains in self-compassion and body appreciation.” Interestingly, these effects were maintained three months later.

Training the mind to focus and concentrate is becoming more critical than ever in this 24/7 world where our attention is being pulled in 100 different direction at once. In a Harvard study, researchers reported that “brain cells use particular frequencies, or waves, to regulate the flow of information in much the same way that radio stations broadcast at specific frequencies. One frequency, the alpha rhythm, is particularly active in the cells that process touch, sight and sound in the brain’s outermost layer, called the cortex, where it helps to suppress irrelevant or distracting sensations and regulate the flow of sensory information between brain regions.”

In this study, participants went through an eight-week mindfulness training program. At the conclusion of the eight-week program, those who completed the mindfulness meditation training “made faster and significantly more pronounced attention-based adjustments to the alpha rhythm” than those in the control group.

It’s easier than ever to learn the basics of mindfulness and meditation. There are courses, books, apps and YouTube videos that you can use. In my experience, the hardest part of mindfulness and meditation is to make it a daily habit. Similar to other good habits, such as exercise and eating a healthy, well balanced meal, having the information for these practices is very different than actually engaging in it.

If you are curious about mindfulness and meditation, commit to a daily practice. Start by committing to a timeframe that you can easily achieve (for example, 2-10 minutes per day). After practicing for a week, reevaluate and see if you’d like to meditate longer (or perhaps shorter). The most powerful proof of whether these practices will “work” for you isn’t a study, but direct experience. So, give it a try and see for yourself.