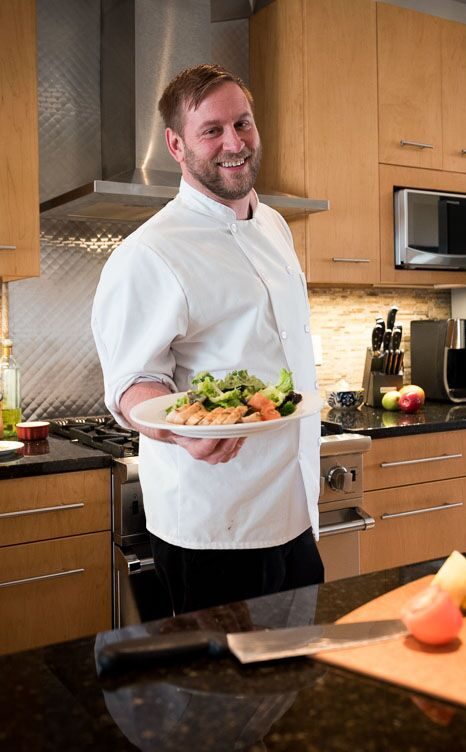 A native of the Connecticut shoreline, Chef Keith recognized his calling for cuisine after moving to Seattle in 1997 as a recent high school graduate. He took a position at bustling Louisa’s Cafe on Eastlake as a prep cook and within 2 years had been promoted to kitchen manager. In 2001 he was hired by Robin Leventhal, (renowned Seattle Chef & a Bravo’s Top Chef Contestant) at her Restaurant, Crave as a Lead Brunch Chef. It was here that he worked with James Beard award winner, Tiberio Simone. Simone mentored Keith and together they catered the exclusive and eclectic Red House parties. In 2004 Keith entered the large scale catering field at City Catering, Seattle. Acting as the onsite chef to high volume events for the likes of Nordstrom & Microsoft, he harnessed the ability to keep detail & quality at the forefront.

In 2007 Keith moved back home to Connecticut and continued his passion for catering. While working at Feast Gourmet he took part in the resurgence of farm to table cooking with “Dinners on the Farm”. Notable was catering the backstage meals for Farm Aid on Randalls Island, New York. In 2010 Keith began his position at Cloud Nine Catering as a Lead Wedding Chef, executing over 30 large scale events a year. Several years later, Keith ventured out on his own and started his personal chef business, Roost Chef. Instantly a great success, Keith became one of the most sought-after chefs on the CT shoreline (and beyond). Catering high end dinner and cocktail parties at private homes on the Connecticut shoreline, Keith found his true passion in food: the connection between taste, presentation and bringing people together.

In 2018 Keith began providing his Roost Chef services to the exclusive Privé Swiss Wellness Program for their retreat clients, focusing on each client’s specific dietary goals, menu restrictions, food likes/dislikes; and assisting in their mind, body, and spirit healing process through food. He now serves as the Privé Swiss Executive Chef/Director of Culinary Operations overseeing all aspects of food service at the company’s different locations and continuing to use his culinary talents in preparing incredible meals!

Keith resides in Old Lyme, CT with his wife Tosh and newborn son, Beckett. You can see him on television on WTNH’s “Good Morning Connecticut”, once a month doing his cooking segment.

Meditation and yoga can ‘reverse’ DNA reactions which cause stress, new study suggests

Well-being in later life: The mind plays an important role